6.3. ISOLATION AND CULTIVATION OF SPIROCHETES FROM THE BLOOD, CSF AND BRAIN OF ALZHEIMER'S PATIENTS

The aetiology of Alzheimer's disease (AD), which affects a large proportion of the aged population, is unknown and the treatment unresolved. The role of beta amyloid protein (beta A4), derived from a larger amyloid precursor protein (APP) in AD is the subject of intense research. Here I report observations that in 14 autopsy cases with histopathologically confirmed AD, spirochetes were found in blood and cerebrospinal fluid and, moreover, could be isolated from brain tissue. Thirteen age-matched control cases were without spirochetes. Reference strains of spirochetes and those isolated from brains of AD patients, showed positive immunoreaction with monoclonal antibody against the beta amyloid precursor protein. These observations suggest that spirochetes may be one of the causes of AD and that they may be the source of the beta amyloid deposited in the AD brain.

Helically shaped microorganisms were observed in the cerebrospinal fluid (CSF), blood and cerebral cortex in 14 AD cases that were absent in 13 controls (Miklossy, 1993, 1994a). 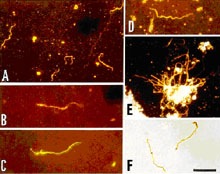 Illustration of spirochetes in the cerebrospinal fluid (A, B) and isolated from the cerebral cortex (D, E) compared to reference spirochete (C)(Borrelia burgdorferi B 31 strain) in patients suffering from neuropathologically confirmed Alzheimer's disease. (Miklossy, 1993, Fig. 1)

In three of these 14 AD cases, spirochetes were grown in a medium selective for Borrelia burgdorferi.

Illustration of spirochetes cultivated from the brain of a neuropathologically confirmed AD patient in BSK II medium, shown in dark field illumination (Miklossy, 1993).

Based on these observations it was proposed that AD may correspond to late stages of neurospirochetoses caused by various types of spirochetes, including oral spirochetes, Borrelia burgdorferi and various other spirochetes.